Vultures (ハゲワシ) are a type of bird that can be found in three types of appearances, black feathers and white collar, blue feathers, and brown feathers.

The black-feathered ones can be found in Cliff Town and Dry Canyon sitting on thick wooden poles. If Spyro comes close enough, they will leave the poles and fly toward him, attempting to attack with their beaks. Their flying is slow and therefore they're easy to kill. If Spyro dodges their attack, they will fly back to their pole and won't attack anymore until they reach it. The vultures are vulnerable to both flame and charge attack. They are also used as bludgeoning weapons by Bird Wranglers.

They can later be found in Lost Fleet, flying around in the sky. Spyro will have to shoot at them with cannons to hit them.

In Spyro: Year of the Dragon, Blue-feathered vultures can be found in Canyon Speedway and Icy Peak, flying around in the skies of those worlds. Spyro can either fly to them and flame them, or shoot at them with cannons (in the latter world, cannon is recommended). They are also seen bringing in a new batch of Lava Lizards eggs in the world of Skelos Badlands.

In Spyro: A Hero's Tail, brown-feathered vultures can be found in various parts of Dragonfly Falls, flying around in the sky. If Spyro gets too close they will dive towards him and attempt to scratch him with their claws, or drop bombs at him. They also appear in the turret minigame in Coastal Remains, where they and Crabs have to be defeated in order to save the baby turtles, and in Cloudy Speedway.

A vulture in Canyon Speedway
Add a photo to this gallery

A vulture in Icy Peak

A vulture in Lost Fleet
Add a photo to this gallery

A vulture in Dragonfly Falls
Add a photo to this gallery 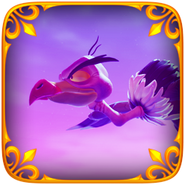 Retrieved from "https://spyro.fandom.com/wiki/Vultures?oldid=120366"
Community content is available under CC-BY-SA unless otherwise noted.