Spyro Wiki
Register
Don't have an account?
Sign In
Advertisement
in: Locations, Urban Levels, The Legend of Spyro,
and 3 more
English

“It was built long ago by the Moles in honor of their friendship with the Dragons.”
—Hunter

Warfang, also known as the Dragon City, is a massive settlement in The Legend of Spyro: Dawn of the Dragon dedicated to the Dragon race. The city sports many landmarks including many dragon statues and an extremely powerful cannon on the ramparts in the shape of a dragon head. Despite being a city made for dragons, it is shown to also be populated by the Moles.

The Dragon City is where Spyro and Cynder took part in battling and defending Warfang against Malefor's overwhelming army of Grublins and stopping the Golem. It was nearly decimated by the resulting attacks.

Long ago, Warfang was built by the Moles in honor of their friendship with the Dragons, who were revered.

Between The Eternal Night and Dawn of the Dragon

Centuries later, Malefor returned shortly after the Night of Eternal Darkness and attacked Warfang. He used his dark magic to tear the city temple and fractions of the settlement from the ground and suspended them above the region as a symbol of his dominance.[1] This caused the ravaged area of Warfang to become a fiery, uninhabitable wasteland filled with lava streams and mini volcanoes. The city inhabitants had since moved far from the aformentioned Burned Lands and built a new wall around the city areas left untouched to separate them from Malefor's forces and domain.

Three years later, Hunter led Spyro and Cynder through the Forbidden Tunnel, and from there, to the Dragon City of Warfang. As soon as they arrived, the City was under attack by Malefor's army of Grublins. Hunter became separated from Spyro and Cynder, and they were forced to go their separate ways. After putting out a building fire and rescuing a group of Moles, the city came under a fierce assault from outside the walls. Spyro and Cynder helped defend Warfang atop the ramparts, before the gates were breached by a Troll. Once the Troll was defeated and the city gates were sealed shut, the army of Grublins retreated, despite having an advantage against the citizens of Warfang by large numbers. It was then revealed that they were allowing Golem from the Catacombs to attack the city. During its rampage, the monstrosity reformed its missing arm from city debris. The Guardians, Ignitus, Terrador, Cyril, and Volteer, lead the attack on the Golem, with Cyril and Volteer falling behind to grant Spyro and Cynder time to defeat the creature.

After it was finally killed, the Guardians were able to be reunited with Spyro and Cynder after three long years. Later that night, the Dark Master Malefor sent them an omnious message through a dark crystal: he had revived The Destroyer, an ancient creature whose only purpose was to renew the world by bringing about its destruction. If it completes its circle around the world, known as the Ring of Annihilation, everything as they knew it would end. Unable to catch the creature if they fly after it, Ignitus concocted the plan by going underground to intercept the Destroyer before Malefor could realize the City was unguarded.

After Spyro reconstructed the world, Warfang was later seen being rebuilt after the war and the earth splitting apart.

Concept art of the ramparts attack by Yan Le Pon 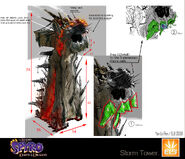 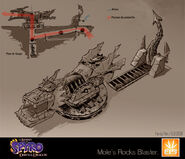 The city of Warfang as seen from the Floating Islands