Unknown (one became a Ram)

Warlocks are dog-like creatues that appear in Cloud Temples, that only appeared in Spyro 2: Ripto's Rage!. They are the main enemies of the friendly wizards that inhabit the temples. The warlocks have stolen the wizards' staffs and have used them to block your progress until you defeat them and take the wands back. They like to put their faces on the doors that they conjure to block your path. They are large enemies that must be flamed to be defeated. They have a rather notable loud laugh.

Warlocks appear to be red in color but, most of their bodies are covered in a black robe. They wear their hair long but, appear to be balding as evidenced by their lack of hair on top of their head. Their hair only hangs off of the back.

In the opening cutscene, a Wizard and Warlock were fighting over whether or not a ram should live or be a stone statue. The Warlock used a spell to take away the Wizard's staff, and allowed the ram to remain animated. In the closing cutscene, however, the Warlock was turned into a purple ram by the Wizard, who got his staff back thanks to the help of Spyro and Sparx. Another ram then fell in love with the Warlock, mistaking him for a female ram, and it chased him offscreen. 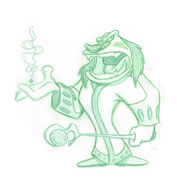 Retrieved from "https://spyro.fandom.com/wiki/Warlocks?oldid=113511"
Community content is available under CC-BY-SA unless otherwise noted.