Water is one of the eight elements in the Skylanders series.

Water is present in all living things. Without it, few of the Elements would ever have come to exist. Water takes on many forms - a calm lake, a torrential rainfall, a furious typhoon - and Water Elementals come in just as wide a range of shapes and sizes. Vast areas of Skylands are covered in Water, and beneath the surface lie a whole host of undersea kingdoms. There are creatures living down there who haven't even found out that dry land exists, never mind set foot on it. From heroic protectos like the Gillmen to the monstrous fish like the Leviathan, Water supports and teems with all manners of life.[1]

Skylanders associated with this element use water and ice to defeat their enemies and have the ability to swim. They are strong against Fire, but are weak against Life characters in the Battle Arena. The color of this element is blue.

Water Skylanders use whirlpools as teleporters after opening a Water Gate. They also stand on a pedestal of water when they're in their toy form.

The Life element is strongest against Water. The grass, flowers, and plants that are part of Life suck Water through their roots to give them strength. Which is great for them, but not too handy for Water.[2]

Concept Art of the Water Skylanders 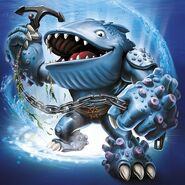 Thumpback, the giant Water Skylander
Add a photo to this gallery

Retrieved from "https://spyro.fandom.com/wiki/Water_(Skylanders)?oldid=114473"
Community content is available under CC-BY-SA unless otherwise noted.