Wind is one of the four breath abilities used by Cynder in The Legend of Spyro: Dawn of the Dragon. This was one of the natural elements Malefor learned in his earlier days.

The symbol of Wind looks like a white swirl of wind on a background of gray-blue. It is Cynder's most useful element (in basic form).

Using Cyclone and Twister will leave the enemies body coated in Wind magic, making them levitate up in the air, allowing Cynder to gain an advantage to attack them. 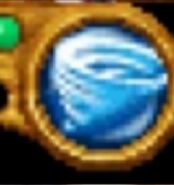 Retrieved from "https://spyro.fandom.com/wiki/Wind?oldid=125058"
Community content is available under CC-BY-SA unless otherwise noted.