The Wizards of Cloud Temples are some of the most powerful magicians in Avalar. They only appeared in Spyro 2: Ripto's Rage!.

Originally Cloud Temples was a peaceful city, where the wizards and warlocks seemingly lived together in harmony, until one day when the warlocks got tired of all this peace and stole the magic wands from the wizards. With the power of the wands, they were able to take over the city. When Spyro arrived, he was able to defeat the warlocks and return the wands to the wizards, thusly restoring peace back to the city.

There are only six wizards living in Cloud Temples, but three others are unnamed. 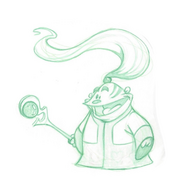 Retrieved from "https://spyro.fandom.com/wiki/Wizards_(Cloud_Temples)?oldid=123065"
Community content is available under CC-BY-SA unless otherwise noted.