Wyverns are a dragon-like species in The Legend of Spyro: Dawn of the Dragon that are part of Malefor's Army. Their origin is unknown, as they may be a type of dragon but were altered, or they could have some dark agreement to Malefor for their service.

The Wyverns first appeared when Spyro and Cynder were defending the Cheetah Village against the Grublins. After defeating the first wave of Grublins, Sparx caught sight of a group of flying creatures heading towards them and recognized them as Dragons, believing that they were going to be saved. However, upon close inspection, they were discovered to not be Dragons at all, but creatures that only resembled Dragons, and Sparx panicked upon this realization. Their alignment with the Grublins became clear when the Wyverns joined them on their assault against the cheetahs, Spyro, and Cynder.

The Wyverns later appeared in cutscenes during the battle in Warfang, aiding the army of Grublins in their attack, and are later battled at the Dam, trying to stop Spyro and Cynder from filling the canyon the Destroyer was in with water to slow it down. The Wyverns made later appearances in the Burned Lands and in the Floating Islands. One Wyvern even appeared as an Elite Enemy.

Wyverns are tricky enemies, since they have the ability to easily avoid attacks while airborne thanks to their slender bodies. They have the ability to screech out rays of dark energy at their targets and use various attacks. Wyverns need to be struck down from the air to ground level in order to attack them directly.

Earlier designs of the Wyverns 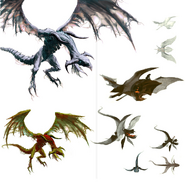 Early designs of the Wyverns

An earlier design of the Wyvern, which included the enemy having a Bowman Orc rider 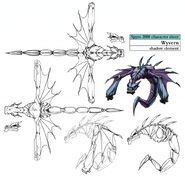 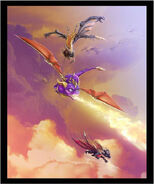 A swarm of Wyverns descending upon the Cheetah Village

A close up look at one of the Wyverns

Retrieved from "https://spyro.fandom.com/wiki/Wyverns?oldid=118022"
Community content is available under CC-BY-SA unless otherwise noted.