Two known to be Male

The first Yeti appeared in the Spyro 2: Ripto's Rage! level Colossus, which was causing trouble for the monks there. It was implied in the opening scene of the level that it even ate one of the monks. This yeti appeared as a dunk tank character in Dragon Shores at the end of the game. It appeared again in Spyro: Year of the Dragon in a Yeti boxing match minigame and as a part of the 'Sasquatch Six' in the Super Bonus Round (all of the Yetis being the same design, but with different colored shorts).

Friendly yetis include Bentley and Bartholomew. Yetis make an appearance in Spyro: Enter the Dragonfly in the level, Monkey Monastery. Yeti live in more than one Realm. They do not seem to be a united race, perhaps different tribes.

The Yetis which appear in the Icy Wilderness realms are enemies that are able to throw snowballs, explosive barrels, and in one case, a crossbow at any of the playable characters. However, Bentley, the friendly yeti, explains that the yetis that are enemies are from a different hostile tribe.

One of the enemies that occupied the Dragon Realms was actually a Yeti. They lurk in the tunnel that led to Sensei's house, the area around the Dragon Temple, and around the entrance to Moleville. They had about 50 HP.

In Skylanders, a four-armed Yeti called Slam Bam is a playable Skylander. In the third game of the franchise, more yeti appeared, notably in the Cloudbreak Islands.

An icon to the Yeti from Spyro: A Hero's Tail. 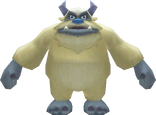 A regular Yeti in Spyro: A Hero's Tail. This yeti has eye irises centered and it's horns and paws are grey. 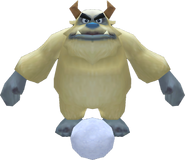 A yeti with a snowball.

A barrel throwing yeti.
Add a photo to this gallery

Retrieved from "https://spyro.fandom.com/wiki/Yeti?oldid=115258"
Community content is available under CC-BY-SA unless otherwise noted.