“Thank you for releasing me.”
—Zeke

Zeke (バベル=ビマーチョ Babel in Japanese) is a Beast Makers dragon who first appeared in Spyro the Dragon. He was trapped in crystal in the Misty Bog realm.

In the Spyro Reignited Trilogy, Zeke is more elderly. His head resembles a matamata turtle with crocodile-like skin. He wears a giant lilypad for a hat, a tooth necklace, a woven net belt, has snails covering him, and is hunched slightly. 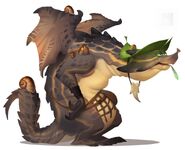 Retrieved from "https://spyro.fandom.com/wiki/Zeke?oldid=123153"
Community content is available under CC-BY-SA unless otherwise noted.