In Spyro Reignited Trilogy, he is portrayed as a lanky dragon with light blue swirls on his body. He has a yellow floating star between his horns, and carries a giant purple hourglass. 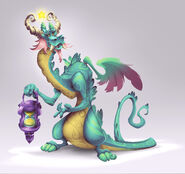 Retrieved from "https://spyro.fandom.com/wiki/Zikomo?oldid=123154"
Community content is available under CC-BY-SA unless otherwise noted.